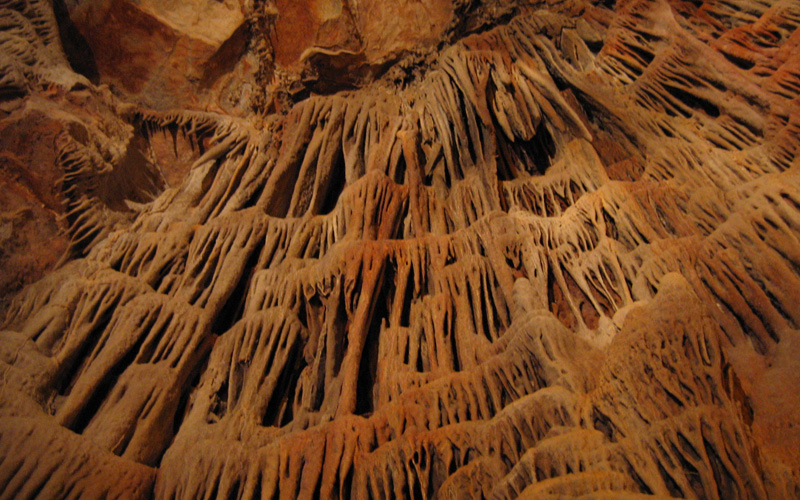 Specialists think of Chios as a geological paradise. Two caves of exquisite beauty, the Olympoi Cave, the Agio Galas are open to the public.
The Olympoi Cave lies in the south of the island at a thirty-five – kilometre – distance from the town of Chios and at a five-kilometre-distance from the Oympoi medieval village. It is a small cave with rich and impressive decoration, and it is even more interesting due to its vertical expansion. At the cave site, there is a gift shop and a café with amazing view of the Aegean Sea.
Guided tours to the cave are offered from early May until late September (daily except for Monday) from 11 a.m. to 6 a.m. For more information, contact the administrative office (22710 93364, 694 7370372 or 694 7370376).
The Agio Galas Cave is located at the north-western end of the island at a sixty-five-kilometre distance from the town of Chios, at the village of Agio Galas. The village is actually built on a cliff and offers a unique view of the Aegean Sea and the historical Psara Island. The cave has a special morphology and is a very important archaeological site. The research has found evidence from the middle Neolithic era. Findings from the excavations can be seen at the exhibition of the Archaeological Museum of Chios.

Daily guided tours to the cave are offered from early May to late September from 11 a.m. to 7 a.m.

The Olympoi cave is at an altitude of 110 metres above the sea. It is an underground cavern with 52 meters depth.

Due to its numerous calcite formations (stalactites and stalagmites), this cave of Chios can be ranged amongst the most remarkable and beautiful caves of Greece. The cave formations are still developing.

The relative humidity of the cave is up to 95% while its temperature is stable around to 18°C. The double doors system at the entrance of the cave aims to keep conditions stable in it, in order for the cave micro-climate to remain unaffected.

The cave was inaccessible for centuries, until members of the Hellenic Speleological Society explored it. The rich décor of the cave triggered the speleologists’ imagination giving the formations names such as: Medusa, Armonio, Cave People.

The largest part of the cave is accessible to visitors, accompanied by a guide.

Excavations' evidence has confirmed that the cave was inhabited in the middle Neolithic ages (6.500 – 5.500 B.C.). The findings include tools, ceramics and weapons and they are exhibited at the Chios Archaeological Museum. At the entrance of the smaller top cave the temple of Panagia Agiogalousaina (13th century) was built.