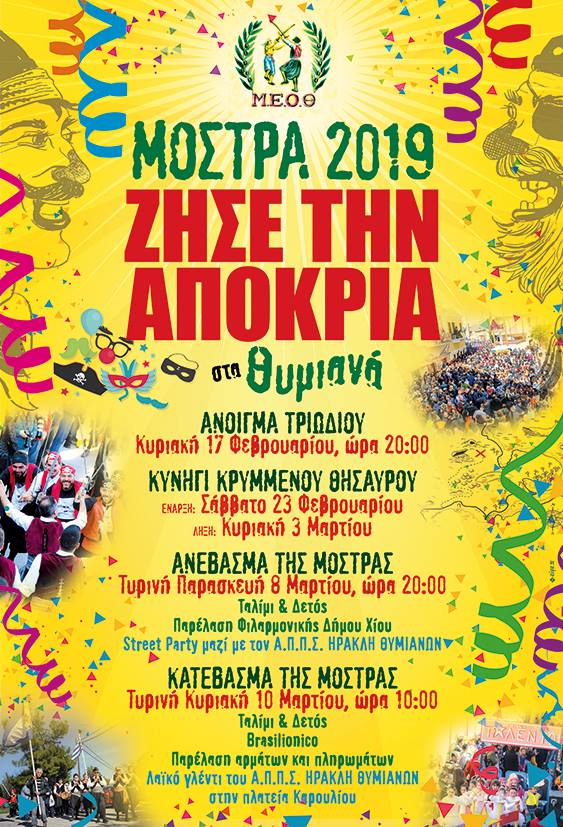 Winter is almost over and spring is fast approaching. On Chios island you can experience special events and traditions all year long, however, the carnival festivities that take place at this time of year, signify the passage from winter to spring. A lot of them derive from the Greek orthodox tradition, mixed with elements of ancient pagan rituals. This is the case with the Carnival which is celebrated all over Greece, but on Chios it has some special events and expressions, that both locals and tourists can enjoy. These special carnival traditions of Chios are so worth experiencing. Chians are known for their sense of humour and their love for life and for a good time. Consequently, the Carnival period is the perfect time to express themselves in the way they know best.

The highlight of Carnival celebrations on Chios island takes place in Thymiana village, just 10 km from town centre. The Mostra and Talimi events take place there. Mostra is a parade of masquerades, that cross Thymiana village, dancing at the sound of carnival music. The parade usually has a satirical theme. Starting on Friday 8 March, before the last Sunday of the Carnival, the people of Thymiana dress up and set up the Mostra, that is, the handmade carnival chariots, performing satirical numbers and wearing handmade masks (moutsounaries). The celebrations peak on Sunday 10 March, the last day of the Carnival. This year, like every year, the traditional dances Talimi and Detos will be performed, followed by a show by Brasilionico Grupo Percussivo, a group of Brazilian street music, and the traditional parade. Festivities conclude, of course, with a traditional panigyri at the village square. 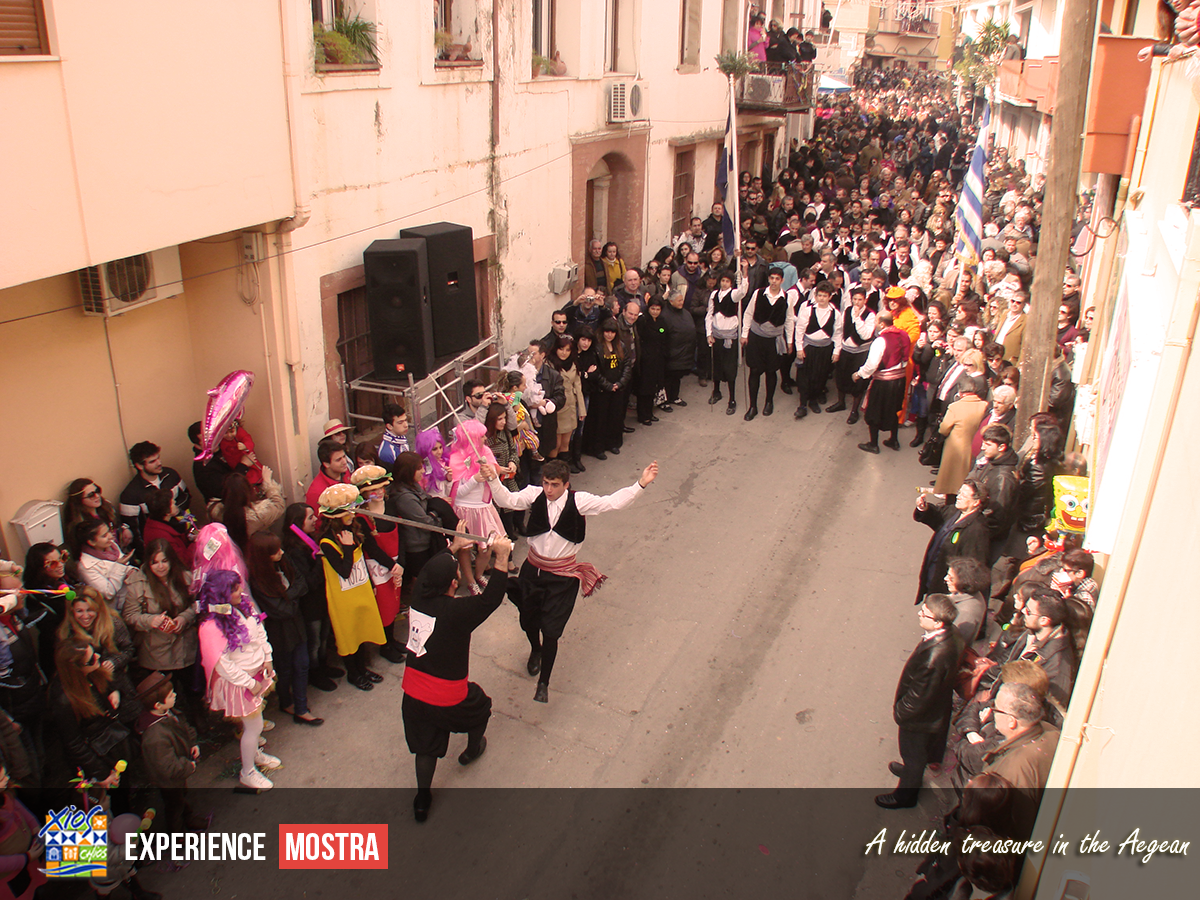 The Mostra tradition has roots back to the Middle Ages, when pirate attacks to the island were very common. It is said that during the Carnival time, while all the villagers were celebrating, the watchtower guards sent a signal that pirates were approaching the coast. The men of the village immediately went there and set up an ambush. The pirates were defeated and the villagers took their prisoners back to the village where they showed them off (Mostra comes from the Italian mostrare) and celebrated. 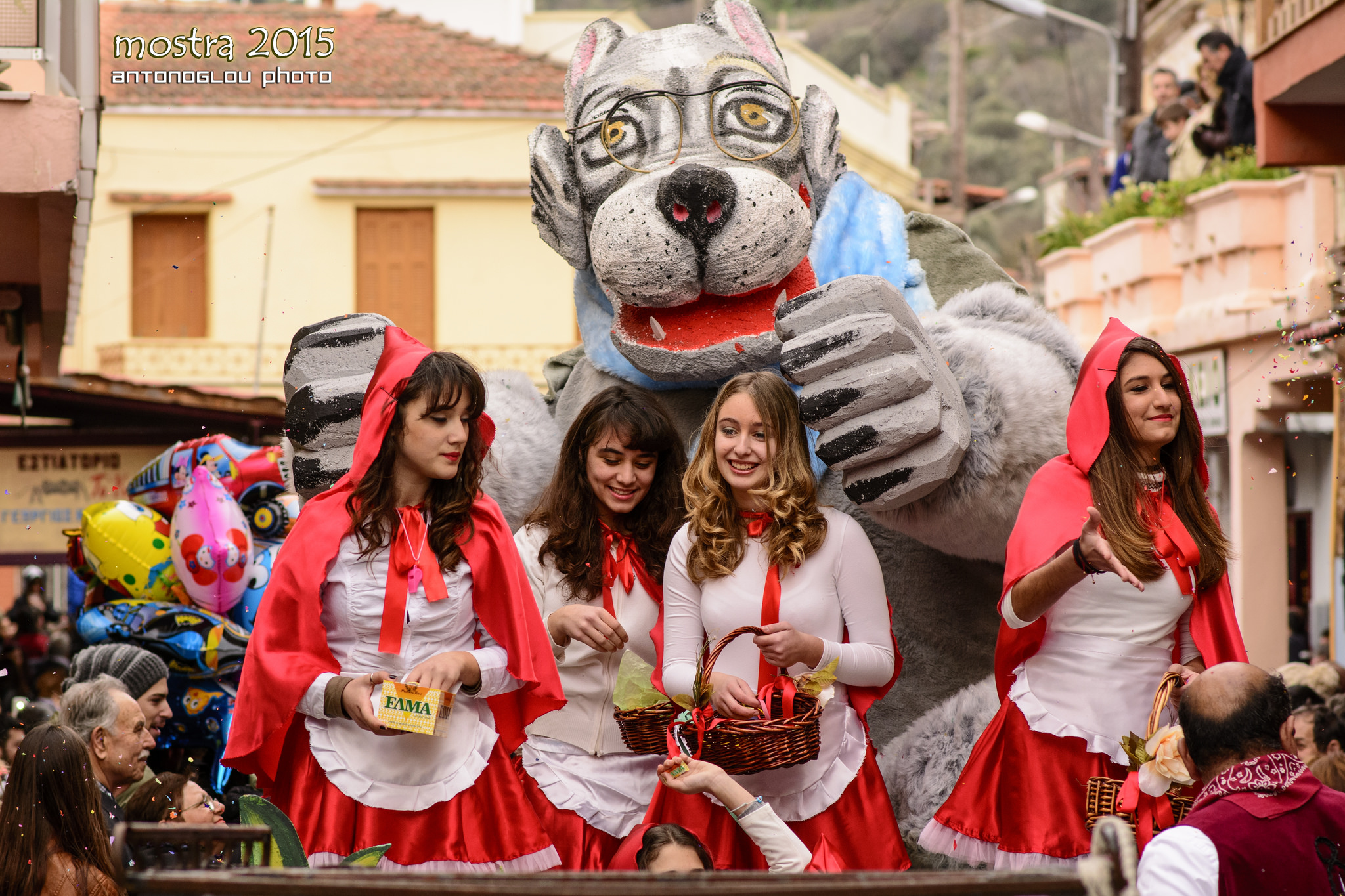 In commemoration of this battle and victory against the pirates, a representation of the battle takes place every year, performed in the streets of the village with the traditional Talimi dance. There are two groups of dancers representing the villagers and the pirates. They dance in pairs, holding swords, dressed in traditional costumes. In the end they dance the Detos dance, holding each other by the arms, a sign of reconciliation and friendship.

Apart from Mostra at Thymiana, here is an indicative list of Carnival festivities around Chios island, depicting the various choices we have for these three-day celebrations. Don’t forget to check out our on-line events calendar, which is constantly updated for inspiration:

The custom of the Oxen is celebrated on the last Sunday of the Carnival. It symbolizes the farmers’ fruition, harvest and good crops.

The Cultural Association of Pyrgi organizes the traditional event of Karkalousses, where locals dress up and walk around the village making satirical jokes, and the traditional “detos” dance is performed. 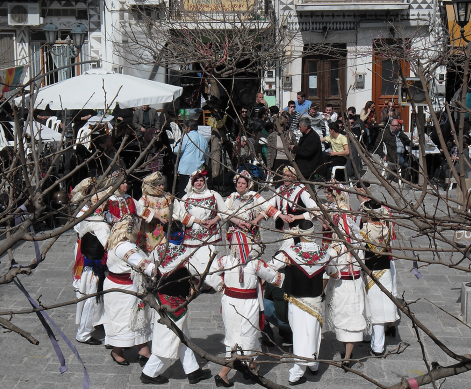 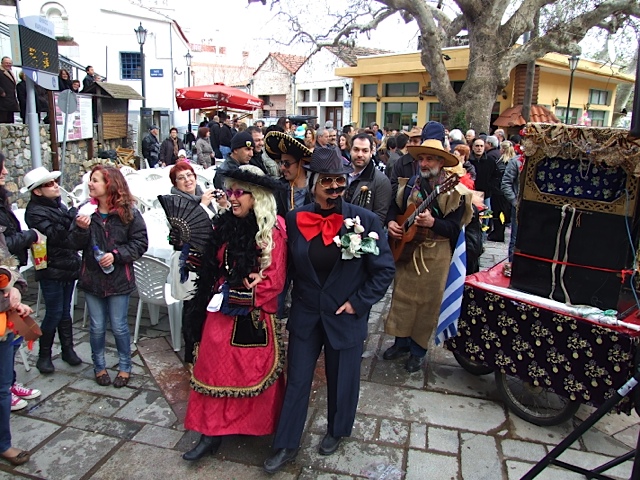 The dance of Diplos revives every year in Volissos, the largest village of the north part of the island. In the old days, on the last Sunday of the Carnival, at the peak of the celebrations, the people would dance this dance, creating human double chains, as they held hands. They would start from every neighbourhood of the village and dance their way to the central square, creating thus a very long chain. At the same time, the person leading the dance would sing and the others would follow. 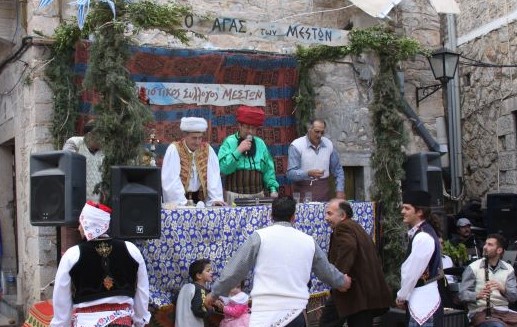 The happening of Aga takes place at Olympi and Mesta villages on Ash Monday (this year on 11 March 2019). It is a parody of the spring tour that the Aga of Mastichi used to make around Mastichochoria, during Ottoman times. The person that plays the Aga is asked to “judge” the  visitors and make them pay a fine to the association organizing the happening. The celebration involves snacks and lots of "souma", a spirit the locals make from figs, in remembrance of the obligation they had to offer hospitality to the Ottoman tax-collectors and officials.

On Ash Monday the Funeral of the Dead is reenacted. This custom denotes the end of the Carnival season and symbolizes the wish for a good harvest with the coming of the spring. A group of men with their faces smudged in disguise carry a man who represents the Dead, whereas the people following mourn as the deceased was a very gifted man. Someone reads a eulogy with underlying sexual content.

There’s a great variety of choices then for traditional events and celebrations at the villages of Chios, not to mention the different parties that take place in Chios town, from Friday through to Sunday, at bars and clubs of the town. Get ready then to party, enjoy life and welcome spring on Chios island!