Chios island, lying at the crossroads of East and West, with the islets Oinousses and Psara, is a trademark of authentic holiday destination. 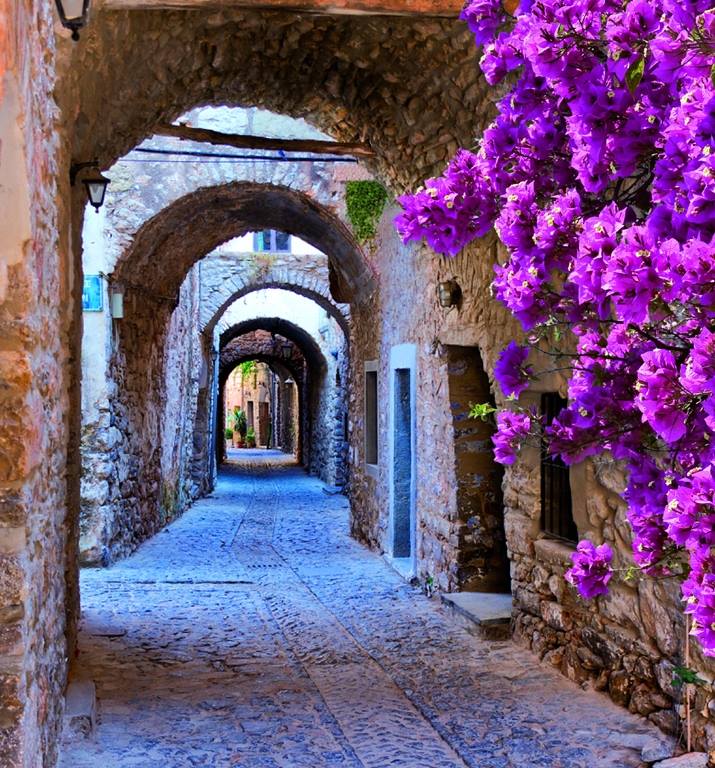 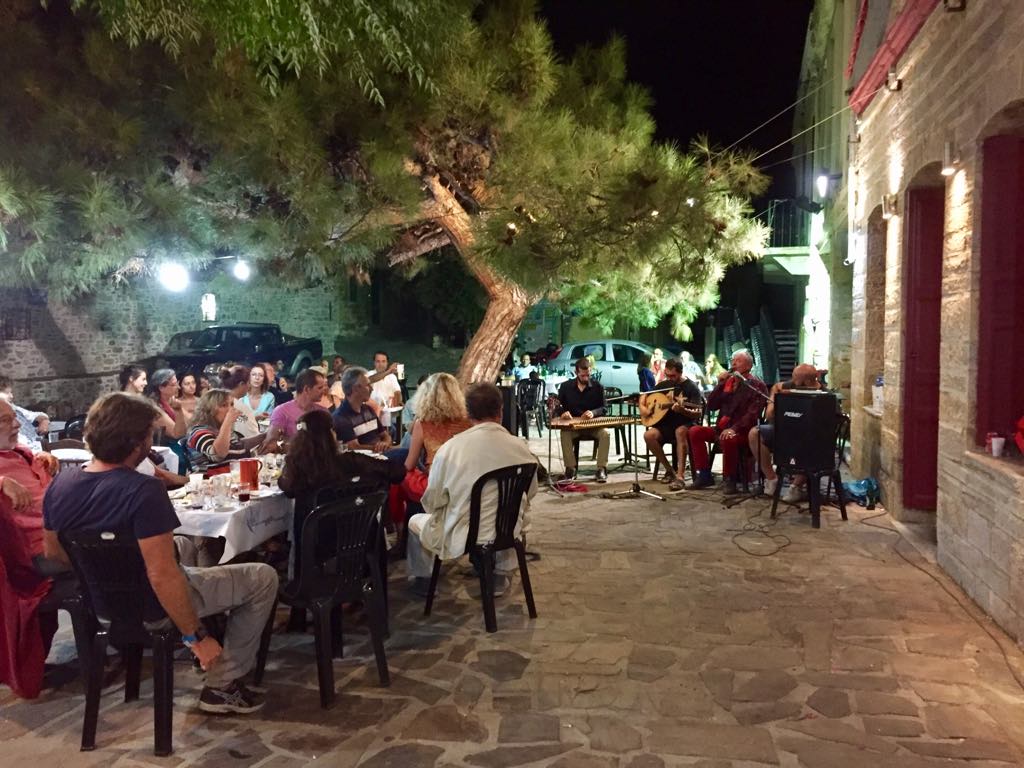 On August 15th, Greek Orthodox Church celebrates the Virgin’s Dormition. The Feast of Dormition is also known as “the summer’s Easter”, signifying the importance of the feast and the holiday. At the peak of the summer holidays, this celebration is an opportunity for families and friends to come together and for visitors of the island to experience traditional events and local dishes at the “panigiria” that take place at the villages. At the same time, during August, a lot of cultural events take place, offering many options for fun and entertainment. 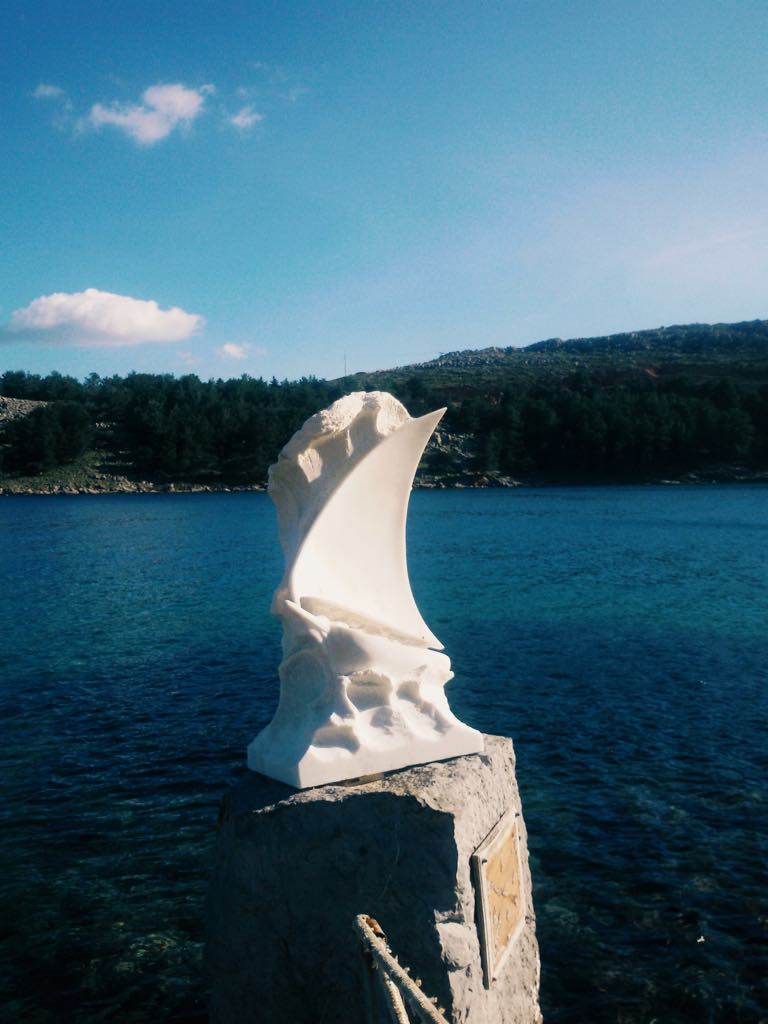 Chios’ long maritime tradition has determined the history and social organization of the island as well as the identity of the destination and its people. It is as important as the cultivation of the unique Chios natural mastiha (PDO).

The maritime villages of the island are full of exciting stories of hard work and success as well as grief and separation. At the kafeneia (coffee shops) mariners (retired or not) will tell stories of journeys at exotic places and ports.

Vrontados, Sykiada, Lagada, Kardamyla and Oinousses are proud of their mariners, captains and engineers. This long tradition of work at sea continues today with a lot of young people choosing to follow a career at the Greek Merchant Navy. The fact that a lot of powerful shipowners that dominate today’s global maritime industry are from Chios has played an important role in this tradition. 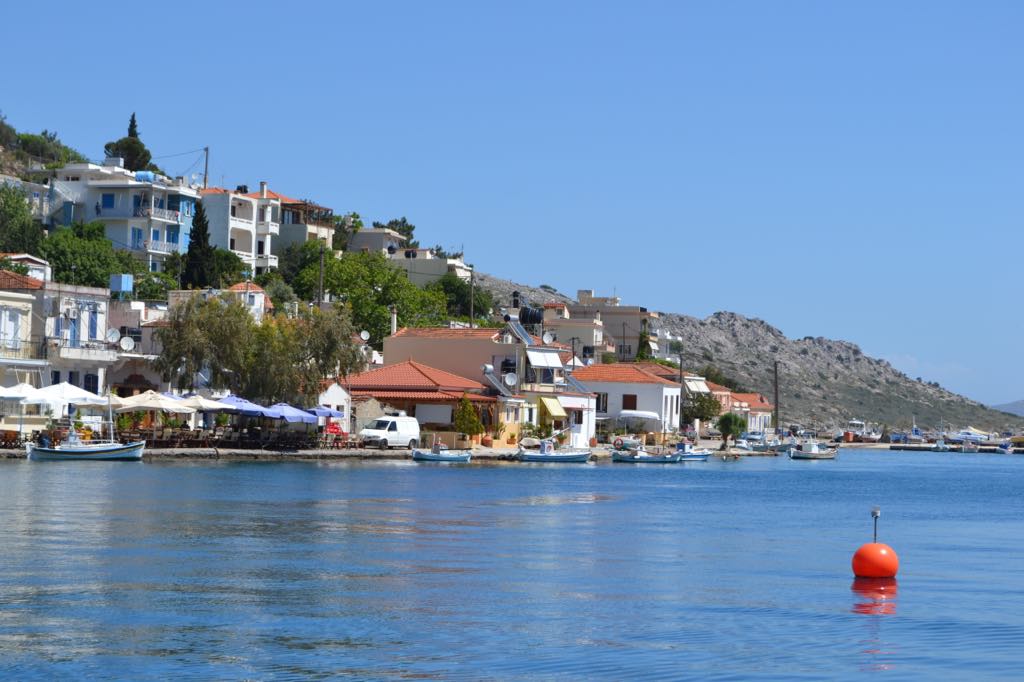 Built by the sea, Chios’ maritime villages are living examples of this long tradition, which is evident in their architecture, the works of art in the public places, the infrastructure projects that have been donated by shipbuilding families (such as the Fafalieion Stadium in Vrontados, the Livaneio High School of Kardamyla and the Schools of Merchant Navy). Everyday life here is built around and based on the sea. 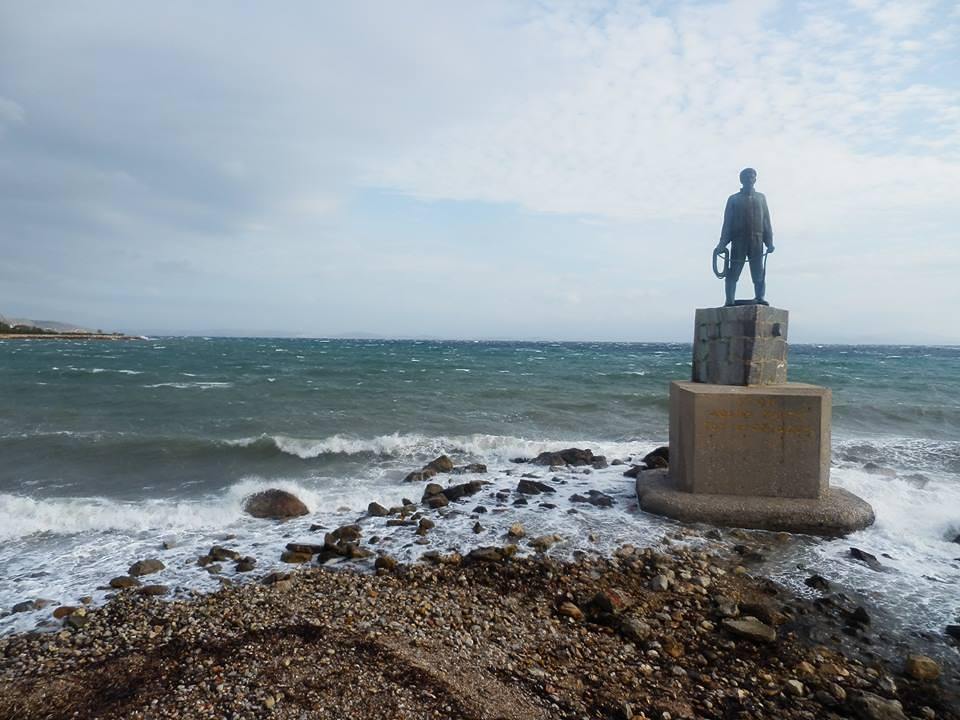 A landmark that one cannot miss at the seaside of Vrontados is the Lost Sailor, a sculpture by Thanasis Apartis, dedicated to the mariners that were lost at sea. Accordingly, Maramaro, the seaside of Kardamyla village, is dominated by the sculptures dedicated at the mariner of Kardamyla and the mothers of Kardamyla that bid farewell to their sons and husbands, as they set out for a long journey at sea. On arrival at Oinousses, we are greeted by the Mermaid, a sculpture by Mary Papakonstantinou, dedicated to the magic sea creature that wishes well to mariners on their trips and a speedy and safe return.

The great epic poet of the ancient world, creator of the Iliad and the Odyssey, is connected to Chios island through a tradition that dates back to ancient times and is alive until nowadays. Homer never mentioned his hometown sparkling thus a long dispute about it, as neither his biographers nor the researchers have agreed upon it. In this long dispute various Greek cities have claimed him, but Chios is always among them, and has become the predominant city claiming Homer’s origin. This connection is supported by a series of evidence from philological sources and archaeological findings to old local traditions. All this evidence has prompted the travelers that visited the island after the 14th century to seek zealously for signs of Homer’s school, his house and his grave. The travelers’ research on Homer added to this tradition that connect the epic poet to the island – a tradition that the people of Chios are very proud of. 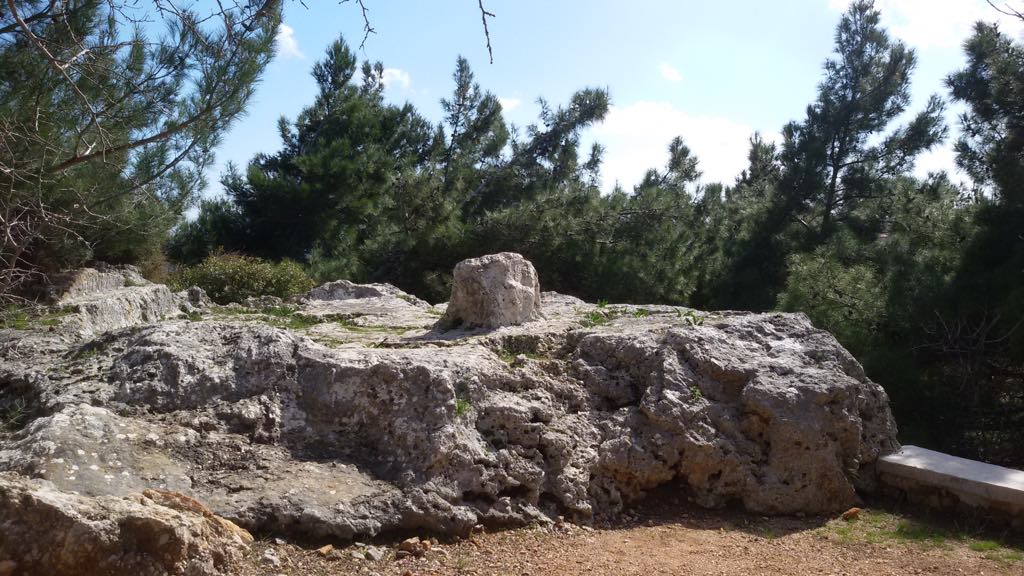 Which areas of Chios island are traditionally connected to the great epic poet of antiquity?

The temple of ancient goddess Cybele at Daskalopetra, also known as Homer’s Rock

The rock of Daskalopetra has been traditionally connected to the School of Homer. The main part of the rock has been thought of as the throne where the poet would sit, teach his students and recite his poems. The rock has always been visible since ancient times: an important site and reference for travelers and visitors.

The interpretation of the ancient monument has long been disputed as well. The archaeological research has now concluded that it was an open-air temple of the ancient goddess Cybele, patron of nature and fertility, whose worship was popular in Chios. However, the misunderstanding with Homer might not be accidental. Some researchers have observed that the goddess’ worship could be connected to poetry competitions and Homerides, bards from Chios, who claimed that their ancestry dated back to Homer himself. 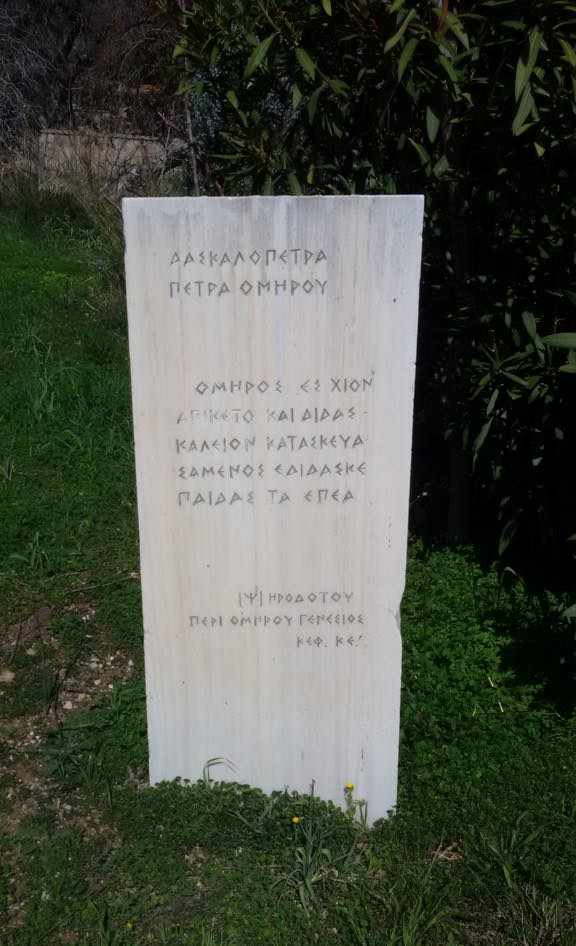 In ancient times there were no authentic historic records on the life and work of Homer, there were a lot of authors who tried to gather evidence that were part of the tradition and the collective memory. This way, the poet’s biographies were created mostly like fairy tales. The oldest and longest biography we know of is by Herodotus of Alicarnassus, known as Pseudoherodotus. The author describes Homer’s arrival and life in Chios. Among other things, he mentions his arrival on the island from Focea of Erythrea, when he spent one night at the beach. After that, he travelled into the mainland and arrived at the village we know today as Pityos. There he wandered in the forest where he had various adventures and he was taken in by a shepherd named Glaucus. The shpeperd led him to Volissos village, where he stayed and worked as a teacher, teaching the local lord’s children. Similar accounts are repeated in other biographies of the poet, connecting Homer to these parts of North Chios.

Homer and the travelers: “Epano merea”

This connection was further supported by the accounts of the travelers that visited Chios from the 14th to the 19th century. They enthusiastically searched “Homeric sites”, recorded their experiences and the locals’ accounts and created maps marking important sites, such as Homer’s settlement and Homer’s grave.

Traveller Christoforo Buondelmonti was a characteristic example. He refers to “Epano merea” the Northwest past of the island, marking on the map he designed "Homer’s grave" and "Homer’s citadel". 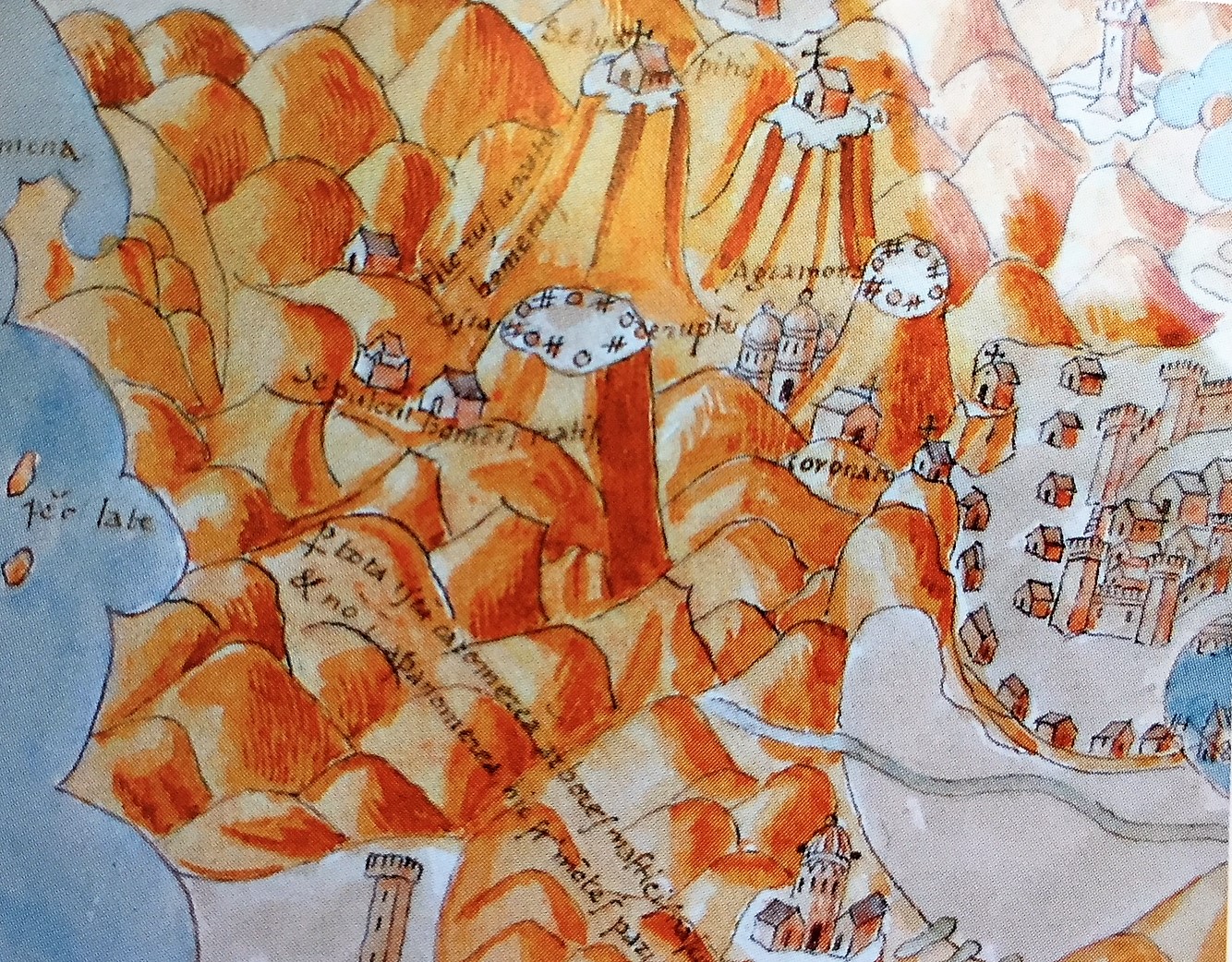 Walking in Chios Castle is like time travel. Let’s get lost in the narrow spiral alleys marked by history and time. Although in the city center, everything here is tranquil, while at the same time it is one of the most vibrant neighbourhoods of the city. Every time we walk around Chios Castle there is something new to discover. 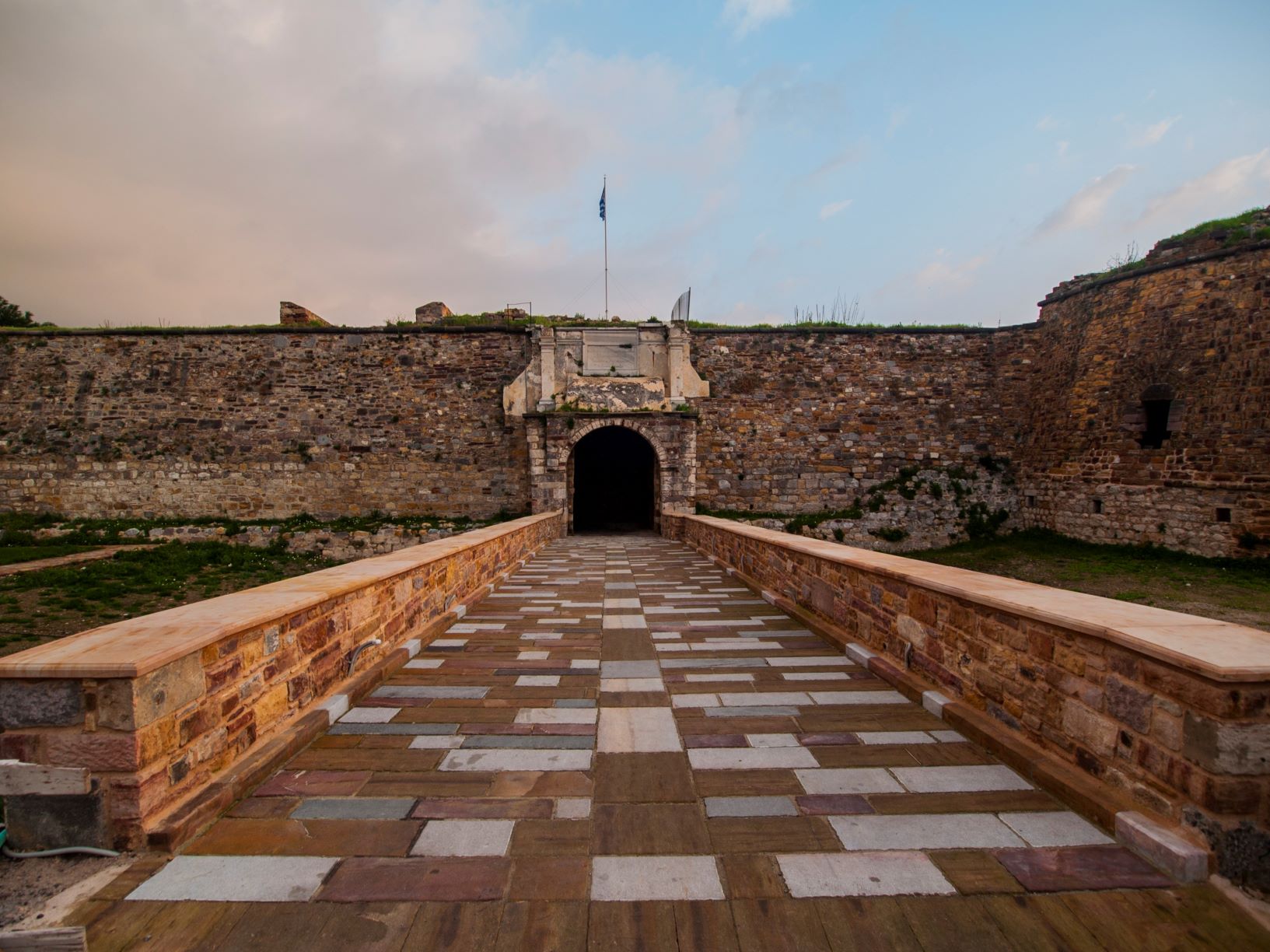 We enter the Castle via the Great Entrance at the south part of the castle. Also known as “Porta Maggiore”, it is an example of the Italian influence on Chios island, as it was built by the Venetians in 1694.

Next to the Dark Dungeon, the Giustiniani palace was the headquarters of the Genovese administration. Today, after its renovation, it hosts periodical exhibitions by the Ephorate of Antiquities. 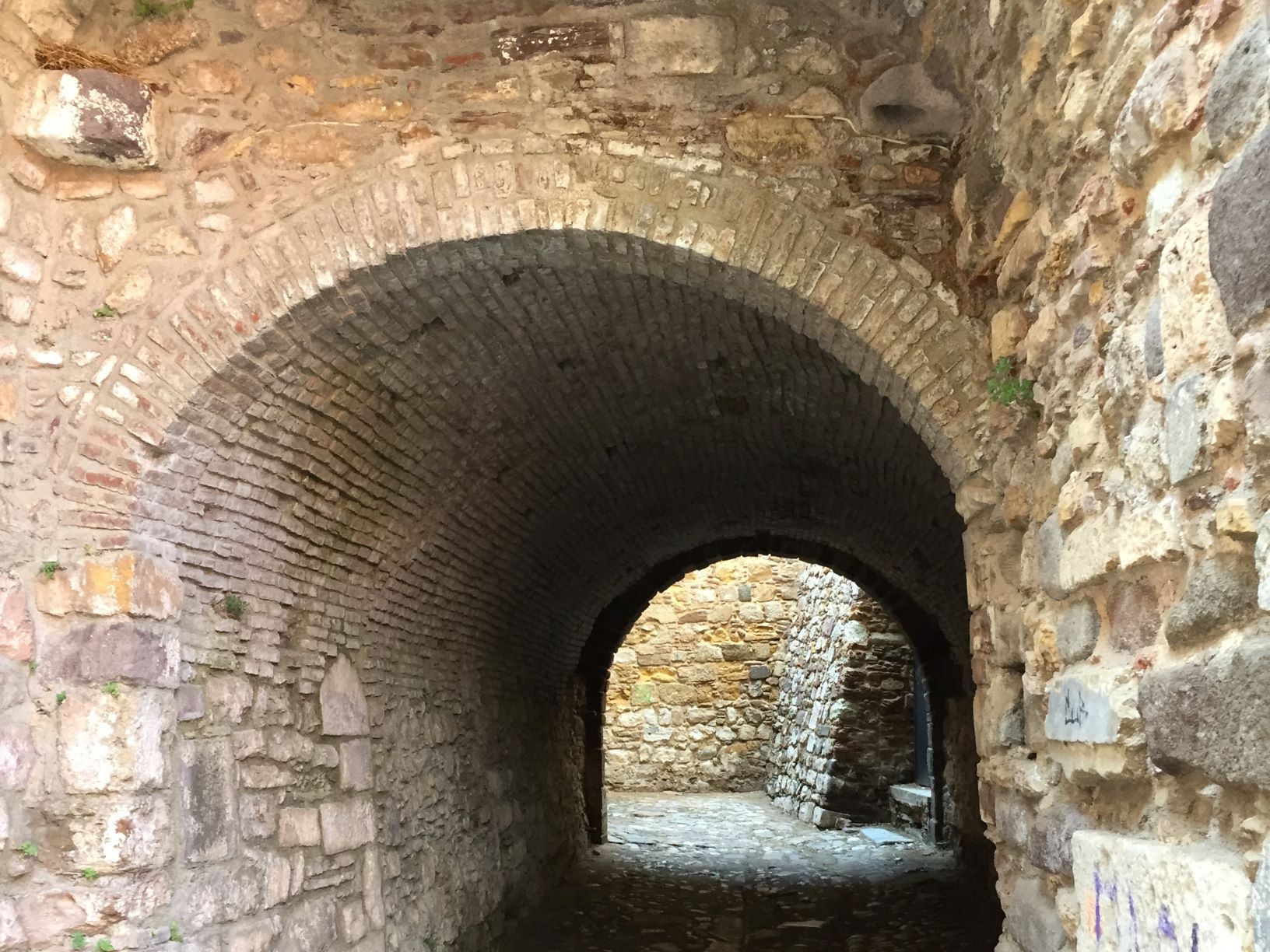 The Ottoman cemetery is located at the Castle square, where members of the Ottoman administration were buried between 1822 and 1890. Among other elaborate tombstones we can see the one dedicated to Captain Pasha Kara Ali, head of the Turkish navy, whose flagship was set on fire by Constantine Kanaris, at Chios port, in June 1822.

Bairakli Cami, the only surviving mosque in Chios Castle, was built at the beginning of the 20th century on the ruins of an older one. Walking on the main street, St. George is the central church of Chios Castle. It was built in 993 A.D. and during the ottoman times it operated as a mosque. The church’s courtyard is shared with the building of the old ottoman school which has now been restored and serves as the offices of the Ephorate of Antiquities. 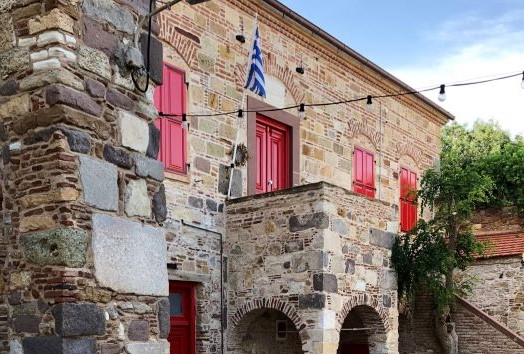 Our next stop is the group of the Ottoman Baths, also known as hammam. They were successfully restored in 2012 and have since become one of the most impressive buildings one can visit in the Castle. Cultural events and exhibitions are often held there. 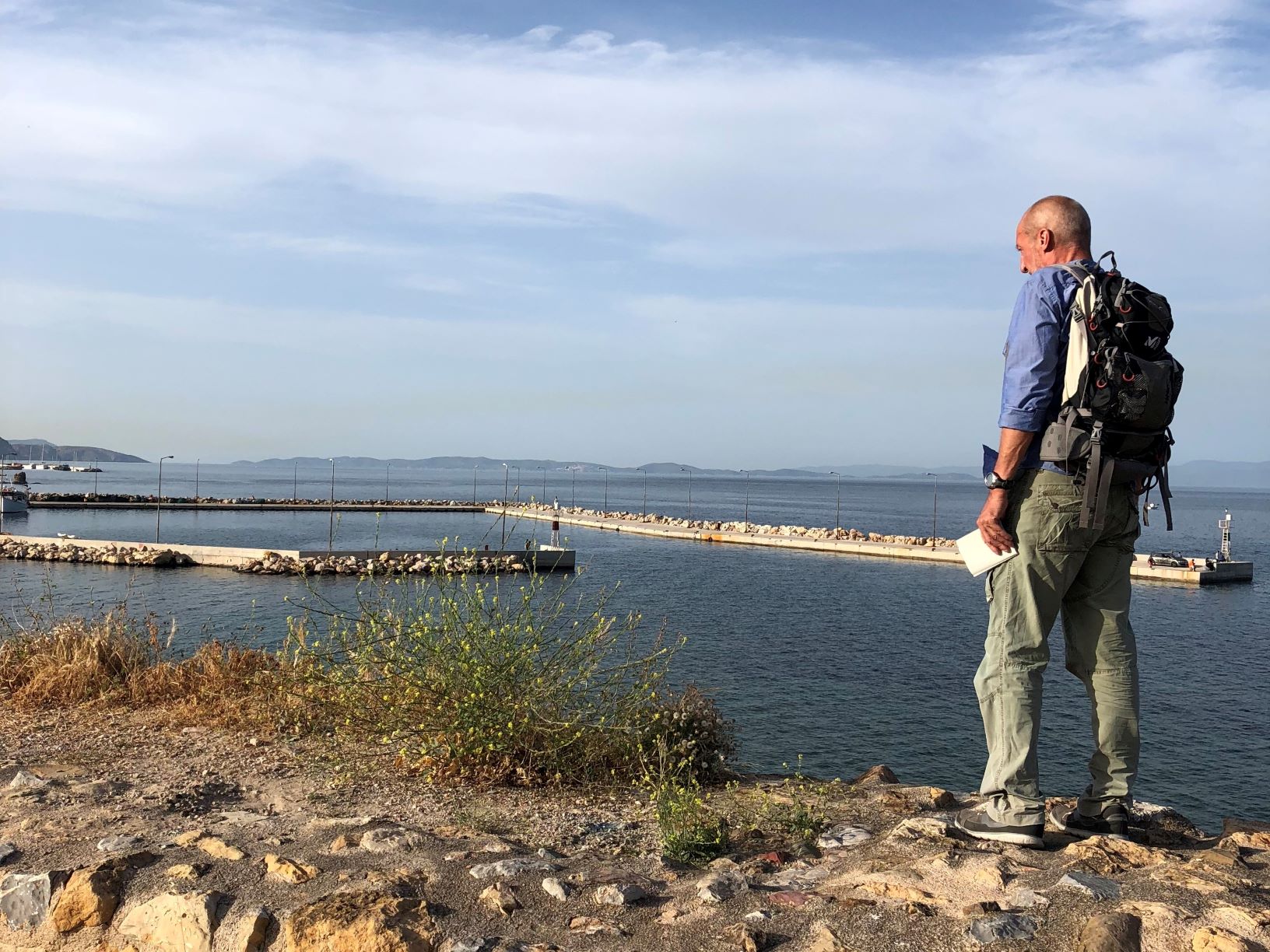 Walking on after the baths, we can walk up to the eastern Castle Seawall. We can enjoy the view of the Aegean and the island’s east coastline. From this point, we can get a better sense of the size and shape of the castle as well as experiencing walking on the walls of one of the few castles of Greece that has retained its original seaside character. 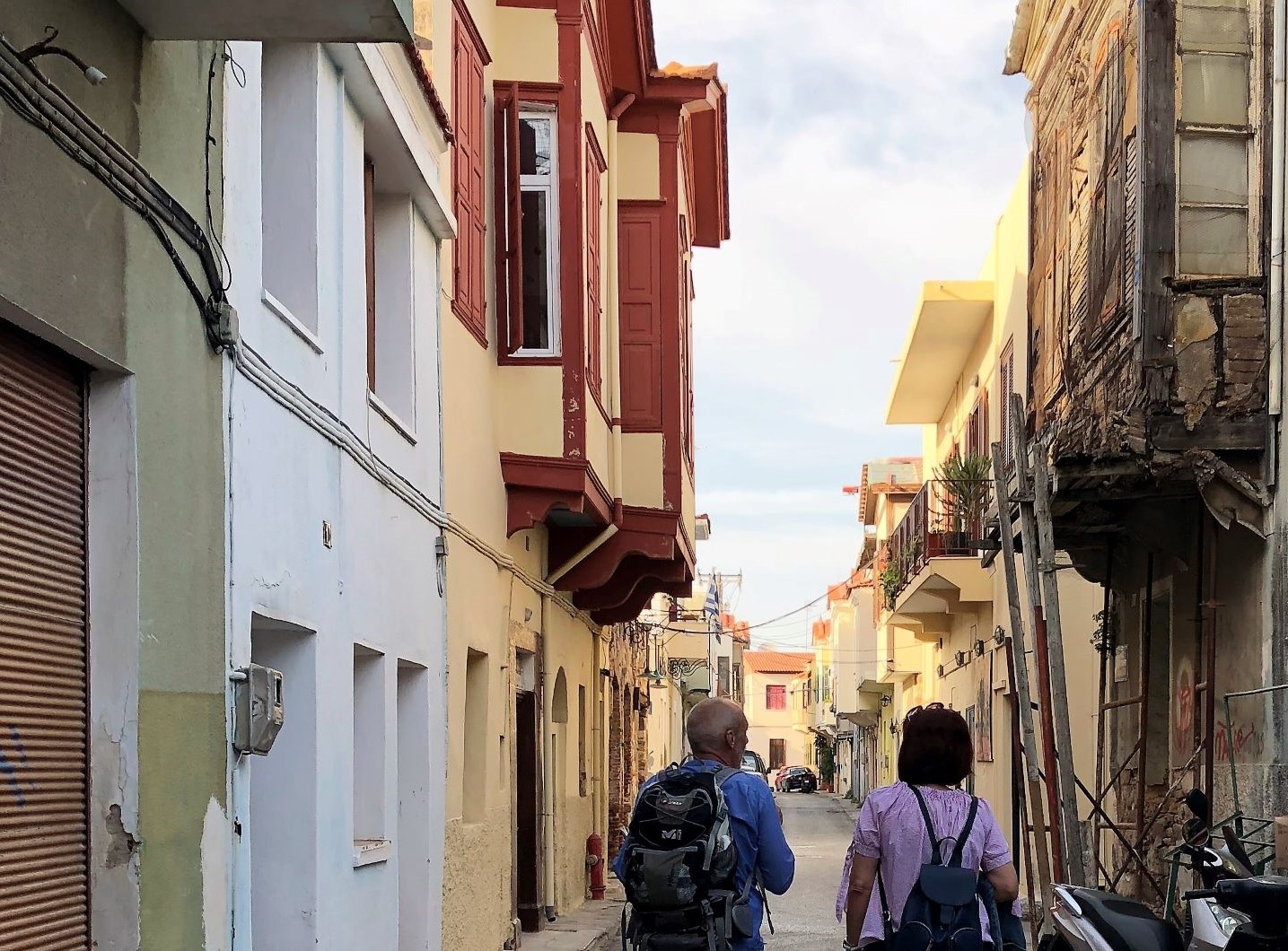 Back to the Castle square, we can enjoy our coffee or drink at one of the cafes. In the streets of the Castle, we discover the traditional taverns to relax with a couple of local meze and ouzo – admittedly the best way to end this beautiful day at Chios Castle. 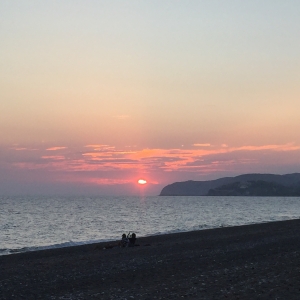 Managros beach is one of the most impressive beaches of Chios island and August is the month to be there. 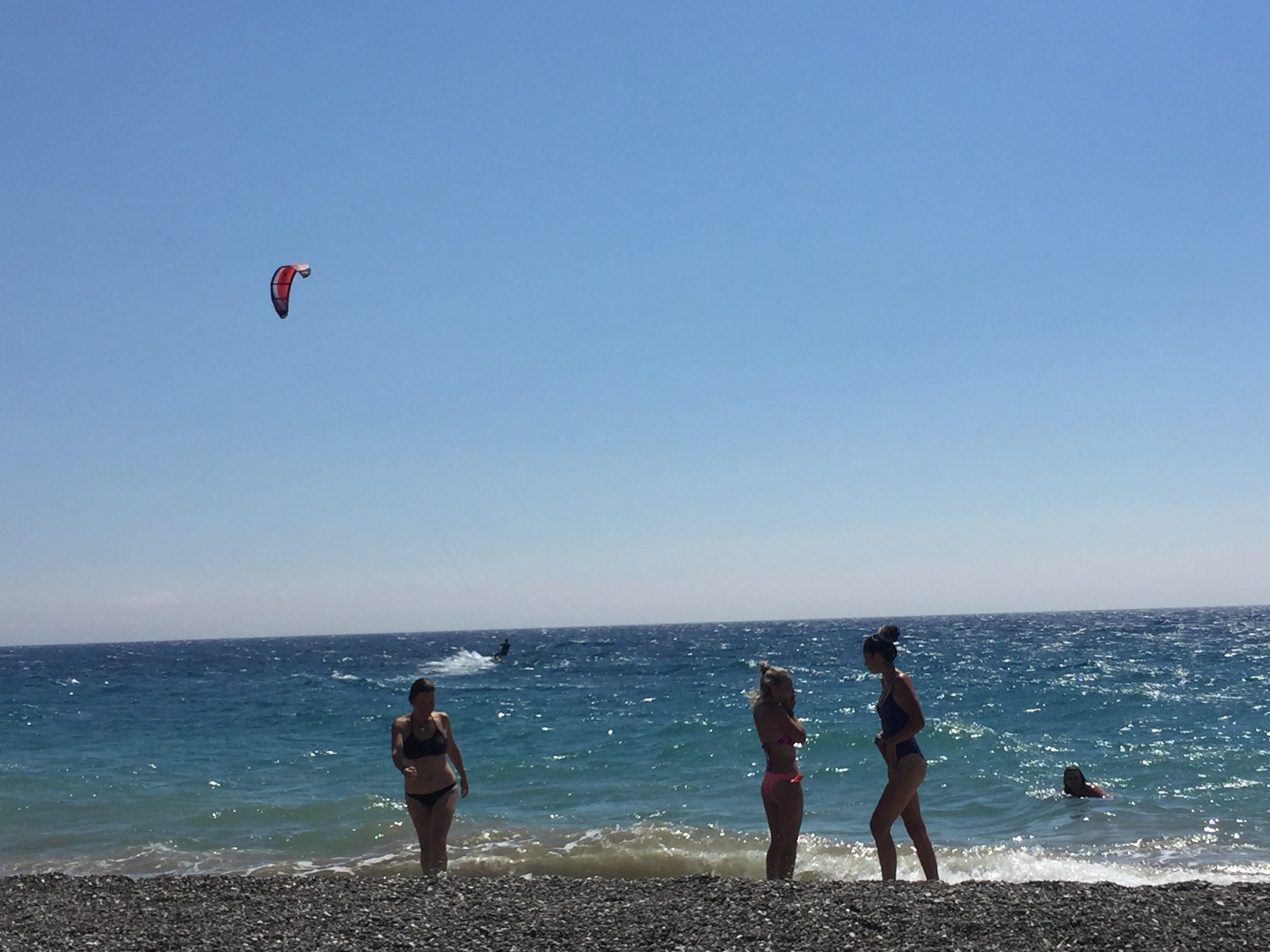 Located 3.7 km south of Volissos village, the capital of Amani area and north-west Chios, it is a sandy and pebbled beach of 7 km, with crystal clear, not too deep waters. The length of the beach allows you privacy even on busy days. The trees that are scattered along the beach offer lovely shade.

An early morning dip in the sea will invigorate you and help you relax on the beach gathering sun and enjoying the morning breeze.

Managros is the kind of beach that holds you, keeps you close, you never want to leave once you are there. For those in need of facilities, there is a beach bar at the northern part of the beach with sunbeds and tasty cocktails.

You will enjoy unforgettable sunsets at Managros and also lie on your back at night for endless stargazing.