Since the ancient times Chios has been connected to people who were distinguished in the fields of the arts and intellectual creation. Chios is considered as the most likely homeland of Homer (8th century B.C.), poet of the Iliad and the Odyssey. Also, Chios is the homeland of Theopompos (a 4th century B.C. historian), the mathematician Hippocrates (5th century B.C.), the dramatic and lyrical poet Ionas (5th century B.C.) and of the poet Kynaithos, who was thought to be the composer of the “Homeric hymn to Apollo”.

A school of sculptors also developed in the ancient times: Mikkiades, Achermos, Voupalos and Athenis were famous sculptors from Chios. It is said that the winged Nike of Delos is the work of Achermos and Voupalos. Another well-known sculptor from Chios was Glaukos, who worked with metal.

Adamantions Koraes (1748 - 1833) was a doctor and a scholar who became one of the most important figures of the Greek Enlightenment. He bequeathed his invaluable library to Chios, thus creating the core collection of the Koraes Central public and historical Library of Chios, one of the oldest, largest and most important libraries in Greece.

Another eminent figure of the Greek Enlightenment was the teacher Neophytus Vamvas who was also born in Chios and taught at the famous School of Chios. Modern scholars and litterateurs include Yiannis Psicharis, Emmanouil Roidis, G. Souris, Lambros Porfyras, Georgios Theotokas, Alexandros Gialas and Fotis Aggoules.

In the fields of painting and music we must mention Yiannis Christou, one of the most important modern composers and philosophers of music, and Nikos Gialouris, an important painter and engraver.

The cultural and intellectual production of Chios is still important. A significant number of people continue the island’s intellectual tradition making important contributions in their selected fields. 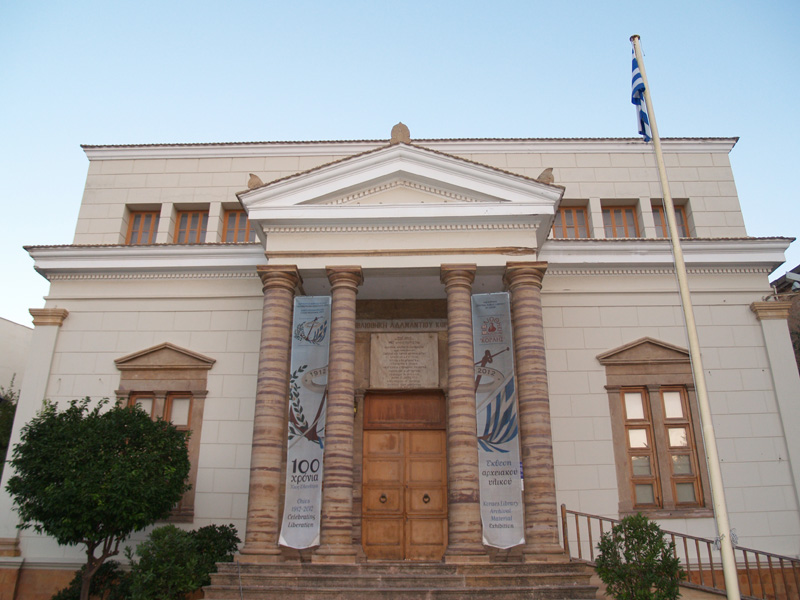 The "Koraes" Public Central Historical Library of Chios is one of the most important libraries in Greece. It was founded in 1792, as part of the Great School of Chios. Its collections include rare manuscripts and invaluable treasures such as the 14 illustrated volumes of the "Description de l’ Egypte" (1802 – 1822 publication), a gift of Napoleon the Great to Adamantios Koraes.
The Library is open to researchers for research and study, as well as to visitors.

The Homerion Cultural Centre of Chios Municipality was founded in 1980 and became a legal entity in 1989. It is a building of multiple cultural uses and its existence is owed to the donation made to the Municipality of Chios by Michael and Stamatia Xylas in December 1985.
In the five floors of the Centre one can find an Auditorium with a capacity of 462 seats, a Conference Room (172 seats), two Galleries, Teaching and Rehearsal Rooms, a Board - room, a Refreshment Room and a Library. The chief purpose of the Homerion Cultural Centre is to support artistic and scientific trends which broaden the sensibility and the knowledge of the public. Among the Centre's aims is the promotion of cultural, educational and scientific cooperation between Chios and other cities.

The services and the facilities of the centre are available to the associations of the whole country for any cultural event of non profiteering purpose. Since the beginning of 1989 various artistic workshops are operating in the Centre's facilities, where specialists are teaching courses on painting, traditional music, theatre, photography, jewelery, bookbinding, mosaic art and icons painting.