For information about the most interesting monasteries of Chios, follow the links: 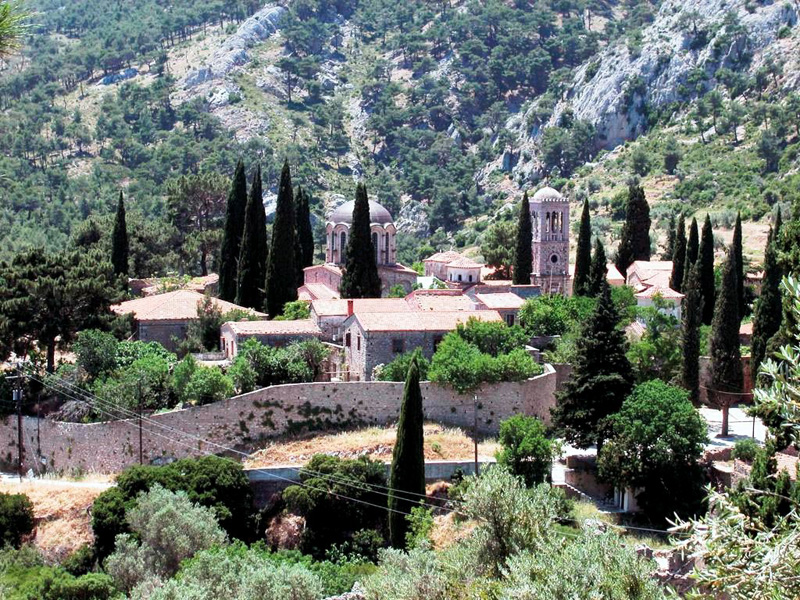 The Nea Moni was built in the 11th century (between 1042 – 1056) and was dedicated to the Assumption of the Virgin Mary. It covers an area of approximately 17,000 m2 and is located in the central region of the island of Chios. The buildings comprising the Nea Moni Monastery include the main church (catholicon), 2 smaller churches, a table or trapeza which was the monks’ dining area, the monks’ quarters (kelia) and underground tanks (kinsternes) that were built to collect water. In the northwest corner of the Monastery, there stands a strong defensive tower. A tall, stone-wall surrounds the complex of the Monastery.

According to monastic tradition, the Emperor Constantine Monomachos founded the Monastery to repay three Chian monks for predicting that his banishment to Lesvos was temporary and he would eventually return to the throne. The three monks discovered the miraculous Icon of the Virgin Mary hanging on a branch of myrtle at the Monastery’s current location. This was where they originally built the small church with a few quarters. The Emperor Constantine Monomachos provided the Monastery with property and revenues, a rare practice for the Byzantine financial system. 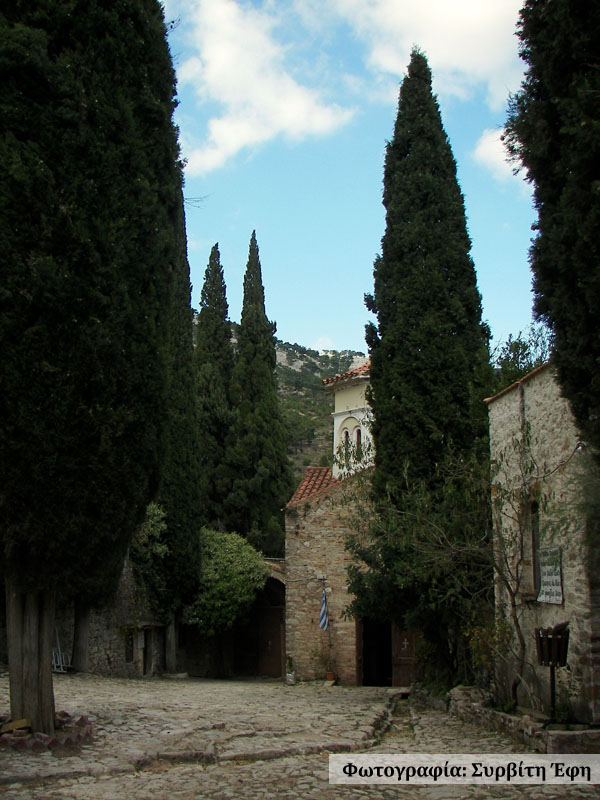 The Nea Moni Monastery became one of the wealthiest and most well known monasteries in the Aegean. This prosperity continued until the Turks occupied the island in 1822 and looted the Monastery, henceforth the beginning of its financial decline. The main church or catholicon is located in the central point of the Monastery. It is comprised of a main church, the esonarthex and the exonarthex. The architecture of the main temple is the well-known “island” octagonal type. The only examples of this architecture in existence today are in Chios and Cyprus. The other buildings contained within the limits of the stone walls include: The Temple of the Holy Cross – a small temple built on the side of the entrance gate, which stores the skeletal remaining of the martyrs and fighters of the Massacre of Chios.

The Temple of Agios Panteleimonas – a small temple on the right side of the road that leads to the Tower. It is dated around 1889.

The Museum – the exhibition of the relics of the Monastery was opened to the public in 1992. 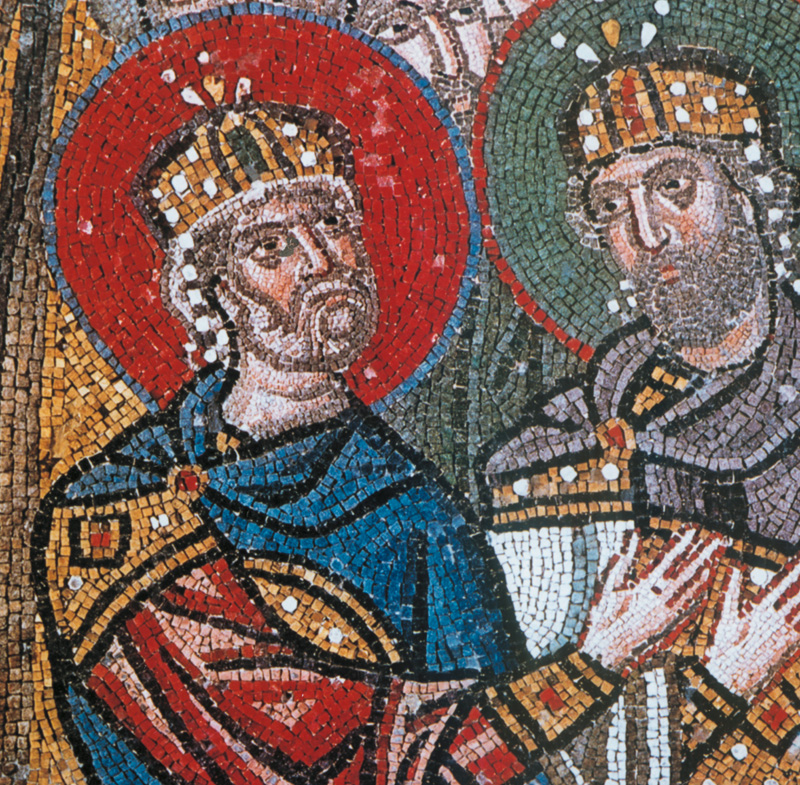 The mosaics of the Nea Moni Monastery date back to the 11th century and comprise a portion of the Monastery’s dowry. Today, it is one of the three remaining collections left in Greece of the mid-Byzantine period and it remains in relatively good condition.

Key characteristics of the technique used to create these mosaics pertain to the dramatic expressions and monastic simplicity in its entirety. The golden background occupies a large portion of the surface drawings and as the light reflects on it, it enhances the transcendence of the depictions and shapes as if they are moving on a superior and spiritual world. Their exquisite quality in addition to the fact that they comprise the work of artists directly connected with the imperial workshops in Constantinople, place them amongst the most significant creations of Byzantine art.

The Monastery is listed in the monuments protected by UNESCO’s World Heritage. 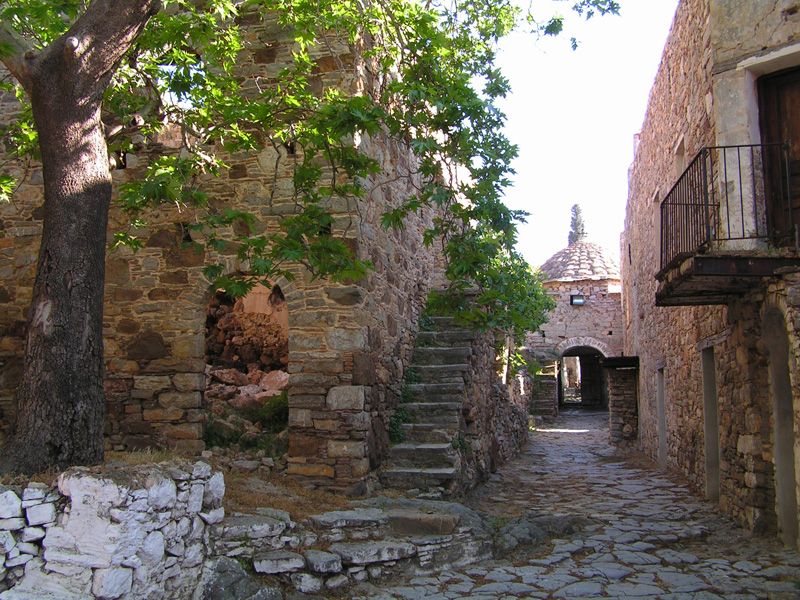 Moni Moundon (Moundon Monastery) is located near the village of Diefha in the northern part of Chios. It honors the name of Agios Yiannis Prodromos (St. John the Baptist), which is celebrated on August 29th. In 1574, it was renovated by the monk Iakovos Lagadiotis and was considered the most significant monastery following Nea Moni.

Men descending from the Chian aristocracy lived in the Moundon Monastery as monks. The Monastery maintained an impressive library containing an exquisite parchment that is dated to 1462 A.D. This parchment probably belonged to the Holy Matrona who was a citizen of Chios.

The Turks destroyed the Monastery in 1822, however, it was reconstructed in the following years. The interior walls of the church of the Monastery display a series of impressive wall paintings dating around 1620, 1730 and 1849. These wall paintings are maintained in good condition and display a combination of the folk technique with Western influence.

Moni Myrsinidiou (Myrsinidi Monastery) was founded by monk Christoforos Seremelis (1897). It is dedicated to Panagia Myrtidiotissa (Virgin of the Myrtles), after the miraculous icon, which the monk found in the sea that the monastery overlooks. The monastery celebrates on September 24 when crowds of worshippers come to honour Her Grace.

The monastery offered valuable philanthropic services during the German occupation as well as during the resistance movement of World War II.

The Monastery Panagia Voitheia is very close to town, on the road that leads to Nea Moni and Karyes. The monk Anthimos Vagianos founded it in 1930, in order to give shelter the nuns that had been evicted from the Asia Minor monasteries. A high wall surrounds the Monastery. Its main church (Catholico) is dedicated to the Virgin. 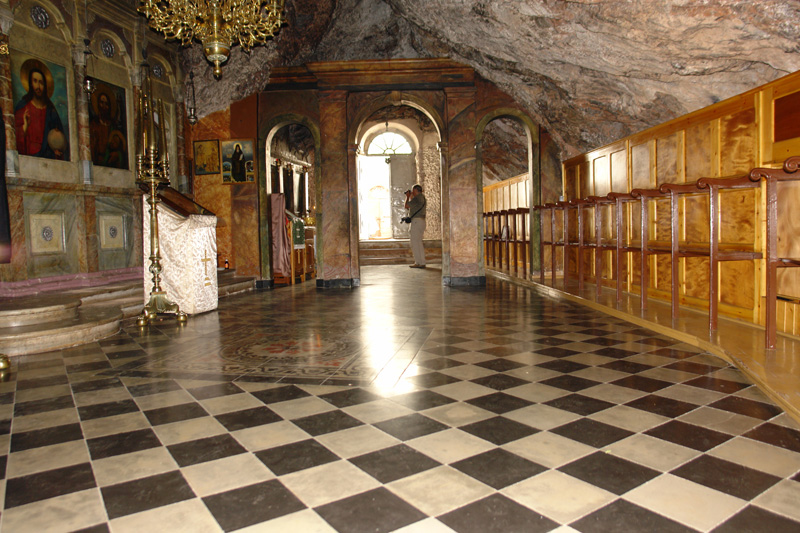 This cloister was built in the cave where the three monks who are credited with the establishment of the Nea Moni Monastery, took their monastic vows. In 1688, the cave was give to the monk Jeremiah, who was from Crete, who constructed the Temple and built quarters. After Jeremiah’s death, the holy monk Pahomios, from the village of Elata in Chios, converted the buildings into the largest monastic centre on the island. Entrance is forbidden to women after sunset.

The cloister of Agios Markos was built in 1886 on the Penthodos mountain and is approximately 15 kilometers from the town of Chios. It was built by the eremite Parthenios who was from the village of Dafnona in Chios and led his ascetic life in a nearby cave.

The Monastery offered valuable services to the Greek army during the liberation of the island in 1912 from the Ottoman rule. Religious painting developed in the Monastery around 1900. Today a rich library has been preserved.

The Reverend Neofitos Koumanos and his son, Reverend Minas, built this Monastery between 1572 and 1595. The Monastery was built on the top of a hill, just outside the village of Nehori. It was intended to be an abbey for monks, however, in 1932, it was converted into a Monastery and is currently home to 25 nuns that occupy their time with religious painting, crafts and sewing ecclesiastical garments.

The Monastery has become famous and is well known worldwide. It is directly linked to Chios’ recent history and more specifically to the Massacre of Chios in 1822 when the Ottoman army slaughtered and burned 3,000 Chiots who had sought refuge there.

Today, the atrocities of the Massacre are still evident in the blood stained marble floor of the church. The Mausoleum, located in the courtyard of the Monastery, displays the bones of many victims of the Massacre.

Above the hilly region of Fragkovounio, at a 5km distance from the centre of the town, close to the cape of St. Eleni, stand the Monastery of St. Constantine and Eleni. Given that it is built on the highest hill and has extremely high walls, from afar it resembles a fortress. The Monastery, which was built to accommodate nuns and began operating in 1901, was constructed at the end of the 19th century by Pahomio Arela, from the Agioi Pateres Cloister. At this same position stood the deserted church of St Constantine.

The Church of the Monastery, dedicated to the Saints Constantine and Eleni stands in the centre of the pebbled courtyard. It is built in a cross-vaulted byzantine style and adorned with interesting frescoes that stand out because of the colourful, harmonious composition. The Monastery comprises of seventy double-story cells, showing the large number of nuns that used to live there, the Holy Table, hagiography and plastic workshop, the “Gallery” the display room for paintings and iconographies as well as guestrooms.

The Monastery is well known for its workshops within Greece and abroad. The nuns continue devoting their time to hagiography and textiles, but there is also a workshop for artistic tapestry and the sewing of vestments. Their works have always adorned the island’s wealthiest homes, whilst the girls’ dowry used to be ordered from the Monastery (icons, tapestry, etc). The workshops continue to operate with the few nuns that remain at the Monastery.

The Monastery follows the ‘old style’ calendar (Julian calendar) and entrance to men is strictly forbidden. From the moment you reach the hill of St. Constantine, it feels like you have left a noisy world behind you. You enjoy the serenity of the area, the calmness and the high aesthetics where white, imperial purple as well as azure of the sea and sky dominate.

The Monastery of Agia Markella (St. Markella), patron saint of Chios, is located alongside a beautiful sandy-stone beach in the northern region of Chios, approximately 8 kilometres from Volissos anf 45 kilometers from the town of Chios. The long seaside is opposite Psara and it is known for its cold deep waters.

At the far end of the beach there is a path that leads to the saint's site of martyrdom. The Monastery was built in honour of the saint’s martyrdom in 1500 A.D.

Thousands of visitors flock to the Monastery of Agia Markella in celebration of the Saint on July 22nd, which is a local holiday. A lot of the pilgrims walk from town to the monastery on the eve of the holiday. They camp within the courtyard of the Monastery and await patiently to kneel and pray before the Saint’s icon. The locals would often tell stories of the miracles that have been performed by the Saint.