It is dedicated to Chios Mastiha (or gum mastic), the unique product that has shaped the natural and human environment of the Mastichochoria area of southern Chios, as well as the productive and economic history of the island. The importance of the mastiha cultivation was recently recognized by UNESCO, with its inscription to the list of intangible heritage.

The permanent exhibition is centred on the gum mastic of Chios as a unique product. It aims to chart the technique of the gum mastic tree's traditional cultivation, and to present the product's history, the evolution of the pre-industrial and industrial technology for the production, exploitation and marketing of gum mastic, as well as to showcase its different uses.

A variety of media are used in the exhibition, such as multimedia applications, films and machines from the first gum mastic factory. The last section of the exhibition is outdoors, where the visitor can see the gum mastic trees and understand the cultivation process. 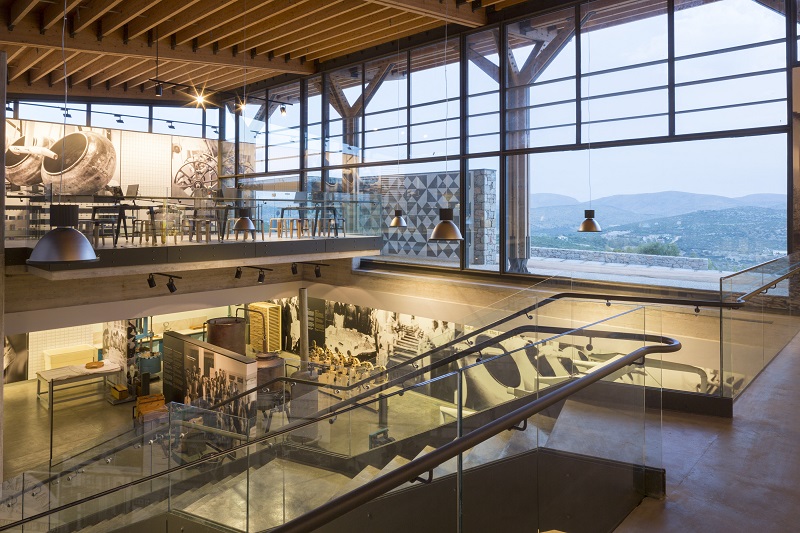 The Archaeological Museum of Chios was built in the 60s and the first exhibition opened in 1977. In 1987 the Museum was closed for reconstruction works. It reopened in 2000. Its permanent exhibition lies in five rooms. Architectural parts from buildings and signs, as well as a unique macedonian style tomb that was found in the town neighbourhood of Fragomahalas, are exhibited at the museum's inner yard.

The museum's exhibition includes findings from excavations that have been conducted by the British Archaeological School in Agio Galas, Emporio, Dotia and Fana. It also includes findings from the excavations conducted by Nikos Kontoleon at Rizari (another town neighbourhood) and also the excavations by the Archaeological Service (Κ ΕΚΠΑ) in the town of Chios. Citizens as well as the Archaeological Service's temporary curator during the 60s and 70s Antonios Stefanou have submitted pieces and objects they have found and collected. Last but not least, there is a room for periodic exhibitions, where findings from the Mycenaeic cemetery at Archodariki of Psara are exhibited.

The Byzantine Museum's permanent exhibition is held in the Ottoman mosque, Mecidiye Cami, which was built in the mid 19th century and was renovated in the context by European funds via the Third Framework of support. Under the funding of the North Aegean Region Operational Programme. The exhibition is part of the effort to promote the monument, making it a part of it. The monument and the exhibition thus complete each other. The exhibition aims to inform the visitors about the history and culture of Chios from the early christian period to the modern era. It also attempts to show how different cultural groups lived in harmony during various periods of the island's history.

The Chios Maritime Museum is the realisation of its founders – all members of important shipping families that have created the Chiot nautical miracle - old dream: to create an important house – museum for the Modern Greek maritime industry. The Chios Maritime Museum is housed in a traditional mansion of the town centre, property of the late Anastasios and Marouko Patera. Their heirs donated the house to the Foundation of Anastasios and Marouko Patera.

The Chios Maritime Museum is the only cultural organisation in Chios dedicated to the island's maritime history. The people of Chios have a long contribution to maritime and commerce. The Museum’s basic aim is to present in the best way, this very important part of this island's life. It does so through the collection of objects and data connected to Chios maritime tradition, as well as to the evolution of maritime and commercial shipping in general. The museum also organises events and activities such as speeches and conferences with subjects related to Chios, maritime. It also pursues cooperation with other maritime museums of the Greek Archipelago. One of the core collections of the Museum was the small but highly important collection of the Progressive Cultural Association of Vrontados (PEKEV), which was enriched with donations and other exhibits, such as model ships and ships' parts.

The PEKEV collection includes portraits of sailboats and steam ships owned by Chios ship owners. The paintings are works of the Chiot painter Aristides Glykas (Vrontados, 1870 – 1940) who specialised in painting ships. The permanent collection also includes model ships and rare photographs of maritime life. There is a special section dedicated to the period after the Second World War, when the Liberty ships and other models that had been constructed during the war, became the basis for the rapid post-war development of the Greek shipping industry.

It was founded in 1965 and its collection includes model ships, paintings, nautical instruments, documents and books related to the maritime tradition of Oinousses. All the objects have been donated by families of the island. The building of the museum, “Pantelis Ant. Laimos” Mansion has also been donated by the Laimos family.

The late mayor of Oinousses, Antonis Sp. Laimos had envisioned the renovation and expansion of the museum. His brother, Nikolaos Laimos, realised this vision, by creating a modern museum with admirable collections.

The museum has had thousands of visitors during the years, which had the chance to learn about the great maritime tradition of the Oinousses Island. The museum can also host events in the “Marina Laimos” room.

The Argenti Folklore Museum and the Argenti Gallery at Koraes Central Public and Historical Library are basically the personal collections of Philip Pandely Argenti.

In 1932, Philip Argenti founded the “Argenti Association” in order to save and preserve folklore and historical material of Chios, through collections of historical artefacts, folklore costumes etc.

The “Ethnologic Museum” opened its doors in 1937, in a room of the Chios High School. Philip Argenti has enriched the collections since, via donations and new acquisitions. Thus, the founder of the Folklore Museum decided to expand the Library's building, adding a second storey, in order to house the Folklore collection, as well as the collection of Chios paintings he had donated.

In 1962 the new rooms were opened. After Philip Argenti's passing in 1974, his son, Pandely Philip Argenti donated more books and paintings to the museum. All the paintings that decorate the entrance of the Library, the stairs and the hallway depict events of Chios history, and were part of Philip P. Argenti's personal collection.

In the ground floor there are busts of the great benefactors of the library, Adamantios Koraes and Philip Argenti, coats of arms of Chiot families, Koraes's manuscripts and personal artefacts, medals, books and paintings. The folklore collection and the gallery are on the first floor.

Art lovers will be thrilled by a visit to the Art Gallery administered by the Municipality of Chios, at the centre of the town.

The construction of the building that houses the Gallery began in 1939 and was completed in 1954. It was designed by the architect Ioannis Despotopoulos. Until the mid-70s the Public Baths operated there. The building was turned into the Municipal Gallery in 1984, under the administration of Mayor Yiannis Boubaris.

The permanent collections include works by Diomataris and Mytarakis and also wroks of contemporary Chiot artists. Apart from art exhibitions the Gallery cooperates with other cultural institutions in order to host various art events.

The Nea Moni monastery is in central Chios on the road to Karyes village. It was founded in early 11th century. At the centre of the monastery lies the catholicon (main church), a monument of exquisite architecture and art. Nea Moni is a Monument of World Cultural Heritage, according to UNESCO.

At the south part of the monastery and south west of the catholikon (main church) lies the Trapeza, which was the dining room of the monastery. The building was renovated and organised as a Museum for the monastery during the second european framework of support. The basic exhibit is the main room of the Trapeza. In the same room byzantine sculptures of the 11th century, that come from the catholikon (main church) are exhibited., as well as ceramics and part of the wall painitngs. The exhbition also includes visula material, texts, designs and photographs.

The monastery has survived a lot of attacks and pillages during its 9-century- history. Thus, its original wealth has perished. All the artefacts that are exhibited in the monastery's small museum are of the modern era and have been donated to the monastery. The museum was renovated in 1980 and the visitor can see objects of ecclesiastical and secular silver art of the 18th and 29th century, as well as icons of the same period. The museum is curated by the 3rd Division of Byzantine Antiquities of the Greek Archaeological Service.

The collection of folklore material and artefacts started in 1995, by the Association “Friends of the Kallimasia Folklore Museum” and it’s President, Yiannis Kolliaros. The idea was to use the 550 sq.m. underground room of the Kallimasia High School in order to house the Museum. The visitor can now see areas that have been transformed in places of traditional professions and activities, such as a traditional village house, a traditional groceries store, an olive oil press and an ouzo distillery. There is also an area dedicated to Karagkiozis, the traditional greek shadow theatre. All artefacts have been donated by people of the villages and Chios town.

The Museum of Ecclesiastical/ Religious art in Kourounia is the only one of its kind in Chios. It is housed in the old primary school of Kourounia village that was built in 1913. Its collections are divided in four main sections: The first section includes works made by Georgios Panayiotakis, the great iconographer who lived in Chios at the start of the last century, as well as works of the iconographer Georgios Kefalas who came from the village. The second section includes visual material of the religious customs of the village. The last two sections are still under development and include ecclesiastical artefacts and books.

The former Municipality of Kampochora (now part of the Chios Municipality) founded this Folklore Museum, which is situated in Chalkeios village, in the area of Kampochora. The museum is housed in an old olive oil press building, which was preserved and renovated from 2001 to 2005.

The idea of the Pharmaceutical started in 2002 and a lot of professionals, such as pharmacists, doctors, historians supported it. Part of the collection is today exhibited in a rood that has been bestowed for this purpose by the Kallimasia Cultural Association “Proodos”.

The museum's purpose is to preserve the island's pharmaceutical history, as well as material from all over Greece and abroad. The museum collects artefacts related to pharmaceutical history, such as books, advertisements, photographs etc. It has also acquired Anastasios Damvergis's archive, who was member of an old family of pharmacists. The museum also organises educational programmes for students.

The Chios Medical Museum is a thematical museum dedicated to the history of medical practice in Chios, thorugh a multi-level approach. Its collection also includes data and visual material of the history of organised health institutions of the island.

Citrus Memories is a space where memories, documents and historical data of the history of Kampos Citrus fruits and agriculture are found. Through a modern, dynamic exhibition, housed in the ground floor of a Kampos estate house, the visitor will be informed on:

Visitors can also watch a short documentary where people of the area talk about their experience of the rise and fall of the citrus fruit trade.